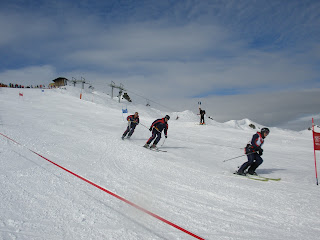 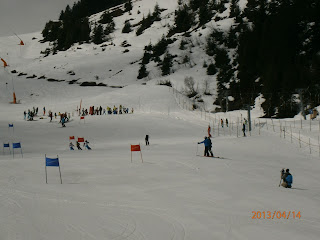 Hochfügen celebrated the 50th Rope Race (Seilrennen) last weekend at the 8er Alm.  After the race was over, the snow man was burnt to symbolise the end of the winter and to encourage summer to arrive!
Traditionally, on the last weekend of the season Hochfügen has had a rope race.  This is a race where three people ski through a GS race course loosely held together on a rope.  Each team must have at least one woman.  Some take it very seriously, though others treat it as an occasion for some fun. Usually, at least one team will dress up in old ski clothing – tweeds, leather boots, felt hat.

This year, was the first children’s rope race.  This was held on Saturday on the Lamark slope.  Hopefully, this will become as long running a tradition as the adult rope race, providing competitors to ensure that the Hochfügen Seilrennen continues for many years to come!

The ski area is due to close on 21st April this year.  It’s a shame, as there is still a lot of snow, though it is quite sticky in the afternoon as the temperatures rise.
So, the season is almost over, time to get the bike out…  Or maybe there’s still enough snow for some touring yet?!